In February, the Sarasota Film Festival unveiled their new campaign artwork created by Tyler Mathis, a Motion Design student at Ringling College of Art and Design. The annual celebration of film returns to Downtown Sarasota March 31st – April 9th, and the theme is a multidimensional play on words: See & Be Seen, Sea & Be Seen, and See & Be Scene. “For that reason, we are excited to share an artwork triptych, each of which captures the different iterations. Which one is your Festival?” 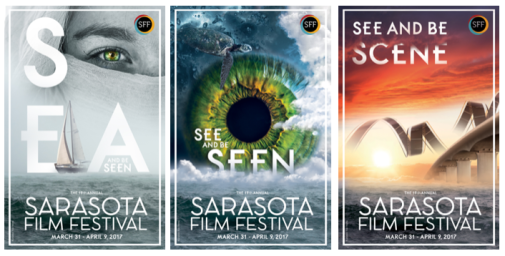 For more information and tickets to the Sarasota Film Festival, please visit their website here!

The Greater Sarasota Chamber of Commerce is a Proud Supporter of the 2017 Sarasota Film Festival!

The Chamber's vision is to create the best business climate in the United States. Our vision is not about having more. It is about having better. Our view of the ideal business climate is a balance between quality of living and quality of working. It is a community abundant with talent, embracing of technology, and encouraging of diversity. View all posts by sarasotachamberbuzz